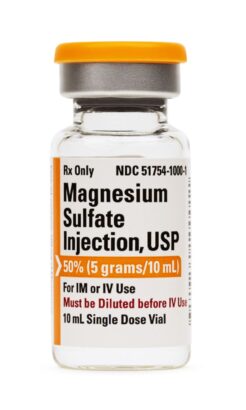 Magnesium is the fourth most common mineral in the human body, behind calcium, sodium, and potassium.
After potassium, magnesium is the second most common intracellular cation within the human body and plays a key role in many enzymatic and cellular processes.
It is essential in the formation and utilization of adenosine triphosphate (ATP),
which provides the needed energy for various intracellular processes.
It is also required for the synthesis of protein and nucleic acids,
as well as several other mitochondrial reactions. Additionally,
magnesium is important in bone development as it is essential in osteogenesis as well as bone ossification.
Magnesium regulation is done primarily in the kidneys where it is reabsorbed and excreted.
Reabsorption of magnesium occurs in the thick ascending limb of the nephron,
and this process is regulated by the parathyroid hormone. In addition to being found in serum,
over half of the total body magnesium is stored in the bone;
it is also stored in muscle and soft tissues in reduced amounts.

Magnesium is clinically administered in the form of magnesium salts.
Of the various kinds, magnesium sulfate is the most commonly used for clinical reasons and may be administered either by oral or parenteral routes.
Some of the common clinical indications for its use include eclampsia,
as a laxative during constipation, torsades de pointe, hypomagnesemia,
acute nephritis in pediatric patients, as a tocolytic during preterm labor,
and acute exacerbation of asthma, among other uses.
Close monitoring is essential when magnesium sulfate is administered parenterally especially in pregnant mothers.
It is classified by the Food and Drug Administration as pregnancy category D drug;
fetal abnormalities have been detected in fetuses and newborns but it can be used if its benefits outweigh any potential risks.
In addition, some studies have shown that parenteral magnesium sulfate administration during pregnancy may delay the onset of lactation postpartum.

With magnesium being an important component of over 300 processes within the human body,
its mechanism of action varies depending on the organ system as well as the process involved.
In the neurological system, magnesium serves as an endogenous calcium antagonist.
By blocking calcium entry at the presynaptic junction,
magnesium inhibits the release acetylcholine and reduces stimulation at the neuromuscular junction.
Additionally, it exerts a voltage-dependent block of the N-methyl-D-aspartate receptors (NMDA) which,
therefore, leads to a depressant effect at the postsynaptic junction.
These inhibitory effects at the neuromuscular junction is one of the reasons why magnesium sulfate may be used by providers for neuroprotection during eclampsia or seizures.
Additionally, magnesium has direct effects on the blood brain barrier as its deficiency,
hypomagnesemia, may result in focal hemorrhages and cerebral edema due to an increase in endothelial permeability,
decreased vasodilatation, enhanced production of vasoconstrictor substances, as well as rapid microvascular damage.

In the cardiovascular system, magnesium serves as a calcium channel blocker, and is a cofactor of the Na-K-ATP pump;
it decreases the uptake of calcium as well as potassium efflux across myocardial cell membranes.
Due to its calcium antagonistic properties, magnesium helps regulate the conduction of electrical impulses across the atrioventricular node.
As a result of its role in the myocardium, one of the clinical manifestations of hypomagnesemia is myocardial excitability which may result in arrhythmias such as ventricular tachycardia and torsades de pointe.
Its calcium blocking effects on the myocardium is why parenteral magnesium sulfate is sometimes used healthcare providers in the management of torsades de pointes,
ventricular fibrillation, and pulseless ventricular tachycardia.

As earlier stated, magnesium is stored in the bone as well as within the skeletal muscle where it plays a key role in the maintenance of the integrity of the musculoskeletal system.
Magnesium is an important cofactor in the activation of vitamin D,
which is needed for bone mineralization.
Inactive vitamin D has to be metabolized into its active form, 1,25-dihyroxyvitamin D, for bone mineralization to occur;
this metabolism is a magnesium dependent process.
Additionally, magnesium is a necessary cofactor in the synthesis of parathyroid hormone, which serves to absorb calcium.
Magnesium deficiency, therefore, may lead to a resultant loss of skeletal muscle,
a condition known as sarcopenia, and a loss of bone density due to both a reduced absorption of calcium and inhibition of the production of 1,25-dihydroxyvitamin D.
Additionally, magnesium deficiency may lead to a loss of bone protection from cytokine induced osteoclastic activity with an increased likelihood in the development of osteoporosis.

Parenteral magnesium is part of the treatment protocol of refractory acute severe asthma in inpatient settings in individuals that exhibit a poor response to traditional first-line treatment strategies.
However, the mechanism of action by which magnesium exerts its effect within the respiratory system is poorly understood.
Several conducted studies have demonstrated an increased incidence of wheezing, airway hydroelectricity, and impaired lung function in the presence of hypomagnesemia.
Additionally, in contrast to individuals with normal magnesium levels, pulmonary function values are decreased in those with magnesium deficiency.

Some providers make use of magnesium sulfate during pregnancy.
In pre-term labor, it may be used as a tocolytic to inhibit uterine contractions.
Magnesium enhances muscle relaxation and vasodilatation by stimulating calcium reuptake within the sarcoplasmic reticulum.
Another mechanism through which it exerts its tocolytic activity is by reducing the amount of calcium within the uterine myometrium,
thereby inhibiting uterine contractility.

Magnesium also serves to increase fluid retention within the colon.
When this occurs, there is a resulting distension of the colon, which leads to an increase in intestinal peristalsis.
The increased peristalsis ultimately results in the evacuation of the colon and provides relief from constipation.

Magnesium sulfate can be administered parenterally either intramuscularly (IM) or intravenously (IV).
Depending on the preparation as well as its route of administration,
it may need to be dissolved in sterile water or diluted before use.
After parenteral administration, magnesium is then taken up by the bone, muscles,
and non-muscular soft tissues where it commences to exert its effects as previously discussed.

One of the major contraindications to parenteral magnesium administration is a demonstrated hypersensitivity to additional substances within the drug such as aluminum products.
Care should also be taken to prevent high serum aluminum levels as this may result in neurological toxicity;
this is especially the case in individuals with compromised renal functions and in preterm neonates.

One of the dangers of parenteral magnesium administration is magnesium toxicity.
Symptoms typically begin to manifest at serum magnesium levels that are greater than 5 mEq/L.
Some signs and symptoms that may be indicative of magnesium toxicity are hypotension,
nausea and vomiting, diarrhea, facial flushing, retention of urine, ileus, respiratory depression and paralysis,
loss of deep tendon reflexes, muscle weakness, sinoatrial (SA) or atrioventricular (AV) node blocks , and cardiac arrest.
Immediate intervention is necessary when any features of magnesium toxicity are detected.

Due to the involvement of magnesium in a large amount of processes within the body, drug interactions result in significant adverse consequences.
Medications that impair the Na+/Mg2+ transporter within the body may result alterations in intracellular and extracellular magnesium concentrations.
Insulin has been shown to inhibit the Na+/Mg2+ transporter and, thereby, raise intracellular serum magnesium levels;
that is why uncontrolled diabetics have an increased incidence of hypomagnesemia.
Additionally, magnesium may enhance the vasoactive actions of calcium-channel blockers, thereby prolonging its effect.
Patients on antiplatelets or anticoagulants may experience increased bleeding as a result of decreased blood clotting while on parenteral magnesium therapy.

Some clinical indications for the use of parenteral magnesium sulfate include:

. To restore normal serum magnesium levels in individuals with hypomagnesemia.
. Treatment of cardiac arrhythmias such as torsades de pointe and pulseless ventricular tachycardia.
. Management of refractory cases of acute severe asthma not responsive to standard first line treatment modalities.
. Management of eclampsia and preeclampsia in pregnancy.

Parenteral magnesium sulfate is an FDA pregnancy category D medication.
Studies have demonstrated fetal abnormalities such as hypocalcemia, osteopenia,
and congenital rickets when administered continuously for greater than 5 to 7 days to pregnant women.
However, it can be used in pregnancy when the benefits outweigh any potential risks.
Additionally, while parenteral magnesium is slightly expressed in breast milk,
its administration in postpartum mothers for longer than 6 hours may delay the onset of lactation.

. Store this medication at 68°F to 77°F (20°C to 25°C) and away from heat, moisture and light.
. Keep all medicine out of the reach of children.
. Throw away any unused medicine after the beyond use date.
. Do not flush unused medications or pour down a sink or drain.