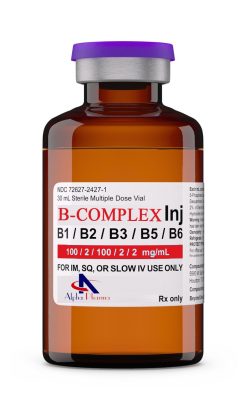 Vitamin B complex is essential for a wide variety of functions in the human body,

Its deficiency can also lead to several disorders including chronic neurological ones.

Biochemically, different structures are grouped together under B complex on the basis of their natural occurrence in same type of food and solubility in water.

Since humans are not able to synthesize vitamins in B complex on their own and these vitamins are easily excreted from the body through urine,

genomic and non-genomic methylation as well as synthesis of numerous neurochemicals and signalling molecules.

B complex deficiency is normally caused due to four possible reasons; high consumption of processed and refined food,

with lack of dairy and meat-based food in diet, excessive consumption of alcohol, impaired absorption from the gastrointestinal tract or impaired storage and use by liver.

According to clinical research parenteral administration (intramuscular or intravenous) is preferred over other drug administration routes in case of emergency situations as it provides first-pass metabolism avoidance,

It can also be used in situations when oral route is not feasible.

Each 10 mL vial contains: 100 mg of vitamin B1 in form of thiamine hydrochloride,

2 mg of vitamin B2 in form riboflavin-5-Phosphate Sodium,

2 mg of vitamin B5 in form of dexpanthenol and

2 mg of vitamin B6 in form of pyridoxine hydrochloride.

B vitamins are necessary for the proper functioning of the methylation cycle,

DNA synthesis, repair and maintenance of phospholipids and generally essential for healthy skin,

The individual functions are described below but more often than not they work together to achieve the required effect.

Vitamin B1 (Thiamine)
It plays an important role in energy metabolism, immunity boosting and functioning of nervous system.

some vision and kidney disorders and neurodegenerative diseases like Alzheimer’s disease.

Vitamin B2 (Riboflavin)
It is a powerful antioxidant and plays a vital role in maintaining healthy blood cells and boosts metabolism.

Vitamin B3 (Niacin)
Niacin plays a critical role in proper functioning of the nervous and digestive systems.
Like other vitamins from the family it is necessary for energy production and metabolism of fatty acids.
It also provides healthy skin, nails, and hair.

Vitamin B5 (Pantothenic Acid)
Pantothenic acid is essential for healthy development of the central nervous system. It is involved in energy production and through different metabolic and anabolic cycles in development of amino acids, blood cells, vitamin D3 and other fatty acids.

Vitamin B6 (Pyridoxine)
Vitamin B6 has a very influential role in synthesis of neurotransmitters and is essential for good mental health. It also has a direct effect on immune function. It plays a role in metabolism of amino acids and is a necessary co-factor in the folate cycle, lack of which can lead to anaemia.
Epidemiological evidence in some cases hints that the accepted dosages of vitamin B helps only to avoid their marginal deficiency and further benefits could accrue from higher dosages than those provided by RDA.

B vitamins play different roles but their functions are inter-related and complementary.

They work as coenzyme in several biochemical reactions to activate enzyme reaction of corresponding protein by creating holoenzyme.

As holoenzyme they participate in the majority of cellular processes.

Although vitamin B1 and B6 participate more actively in the methionine cycle and citric acid cycle,

which is the mitochondrial energy production process,the entire vitamin B group is involved in its successful execution.

Vitamin B1 (thiamine) serves as a coenzyme with transketolase enzyme in the pentose phosphate pathway of glycolysis.

This pathway generates pentose sugar for synthesis of amino acid and nucleic acid and converts glucose to ribulose-5-phosphate via retrieving the carbon from the pentose phosphate shunt.

Vitamin B2 (Riboflavin) plays an important role in many biologically important redox reactions such as energy producing,

Riboflavin is also essential for the metabolism of homocysteine, as a cofactor for methylenetetrahydrofolate reductase (MTHFR) and methionine synthase reductase (MTRR).

In the citric acid cycle, Vitamin B3 (Niacin) is involved in the formation of acetyl-CoA while conversion of its co-enzyme takes places from NAD+ (nicotinamide adenine dinucleotide) to NADH.

In the anabolic methionine cycle, niacin, in the form of NAD, is a necessary co-factor for the enzymes dihydrofolate reductase in the folate/tetrahydrobiopterin cycle and S-adenosylhomocysteine hydrolase.

Vitamin B5 (Pantothenic Acid) is a component of coenzyme A. At least 70 enzymes utilize coenzyme A for the metabolism of fat, protein, carbohydrates and proper functioning of citric acid cycle.

It is also involved in synthesis of several neural transmitters.

Vitamin B6 (Pyridoxine) acts as a necessary cofactor in the folate cycle and combines with serine hydroxymethyl transferase to effect the conversion of tetrahydrofolate(THF) to 5,10 methylene THF.

B6 is a rate limiting cofactor in the synthesis of several neurotransmitters such as dopamine, serotonin, γ-aminobutyric acid (GABA), noradrenaline and the hormone melatonin.

Even a minor deficiency of B6 can cause a substantial down-regulation of these neurotransmitters.

B6 also plays an important role in immune functions and is also a bio-marker of inflammation with its down-regulation being associated with severe inflammation.

Thiamine (Vitamin B1) taken through the dietary route is phosphorylated in the intestine and enters the blood stream as free thiamine.

In blood it diffuses down a concentration gradient in the liver, heart, kidneys, and brain entering the brain using both active and passive processes.

Even with pharmacological dosage, thiamine is rapidly metabolised and eliminated from the plasma and is found in much higher concentration as phosphate esters in erythrocytes (10x) and leucocytes (100x).

After repeated doses of 250 mg every 12 h a steady state of close to 22ug/l of thiamine in plasma has been reported for both oral and parenteral routes.

After parenteral administration of a single dose of thiamine, the elimination from plasma phase is triphasic with reported half-lives of about 0.15 h, 1 h, and 48 h.

Thiamine is eliminated mainly via urine either unchanged or as about 20 metabolites with the amount eliminated as thiamine being proportional to the intake.

Dietary riboflavin is converted to its functional coenzymes via the action of flavokinase and flavin adenine dinucleotide (FAD) synthetase mainly in the liver and since that path is bypassed for intravenous administration the kinetics change significantly.

The observed systemic clearance of riboflavin is in the range of 950 mL/min (observed for a body surface area of 1.73 m2) and protein bound in blood plasma is close to 35%.

More than 50% of the bound protein have been observed to be in the form of flavocoenzymes and this could be as high as 80%.

The renal pathway contributes significantly to elimination of riboflavin and around half of the systemic clearance occurs through it.

Niacin, as nicotinic acid, normally converts to NAD+ before being released into circulation as nicotinamide through action of NAD glycohydrolases in liver and intestine.

This precursor of niacin is commonly transported for intracellular functions in tissues via NMN transporters although many cells also express nicotinic acid transporters.

Pharmacological dosages of nicotinamide cause an increase in tissue NAD and poly ADP-ribose metabolism. Peak blood nicotinamide has been reported to be in the range of 1-2 mM range about 3000-fold higher than normal circulating levels and it disappears with a half-life of 4-5 hours.

Vitamin B5 or (R)-pantothenic acid participates in pantothenate and CoA synthesis pathway and as well as the Beta-alanine metabolism pathway in humans. When supplied intravenously, typically in the form of D-pantothenyl alcohol, it is first metabolized to pantothenic acid (PAA).

Pantothenic acid is consumed in the metabolism of coenzyme A which plays a role in the synthesis of acetylcholine from choline.

Following intravenous application of 2 gm of D-pantothenyl alcohol an increased urinary excretion of the vitamin pantothenic acid was reported with a total 10 to 30% of the total dose being eliminated within 24 h.

Simultaneously, the urinary excretion of beta-alanine, a pantothenic acid component, is increased.21 In animal studies, intravenous administration of salts of B5 has shown more rapid distribution and elimination compared to oral routes.

Additionally, such studies have indicated a special PAA-depositing system which provides intracellular CoA biosynthesis and higher vitamin-retaining ability of the PAA-deficient tissues.

Pyridoxine hydrochloride (PN • HCl), a common pharmacological source of B6, has different utilisation when supplied via oral and intravenous administration.

This difference is attributed to the first-pass-effect of liver on its metabolism when taken orally similar to other vitamins in B family.

The different components peak around 6 to 9 hours after intravenous administration and their availability is much higher than oral administration reaching as high as 7.5 times in case of pyridoxal 5′-phosphate.25 Renal elimination is the main pathway of excretion of vitamin B6.

More than 70% of an intravenous 100 mg PN • HCl dose was observed to be excreted from urine in form of different metabolites with the largest component being 4-pyridoxic acid.

Doses of B vitamins are quite efficient for prevention and treatment of vitamin B deficiency and as a combination with other therapy for the treatments of Aphthous Stomatitis,

Wernicke syndrome,due to chronic alcoholism and/or malnutrition as well as nutritional macrocytic anaemia.

hypoglycemia, and acquired immunodeficiency syndrome are among other conditions where B vitamins can be administrated.

Intravenous administration of Vitamin B preparations should be done slowly and if necessary, the preparation should be diluted to avoid speed reaction.

The patient should be questioned closely about any symptoms from previous doses to prevent severe reactions.

A skin sensitivity test prior to administration is advised.

For the older patients (60+ years) specially with arteriosclerosis, possibility of circulatory collapse after administration should be kept in mind.

Vitamins from B group are generally recommended during pregnancy and breastfeeding as per individual requirement.

These vitamins pass through breast milk to the infant.

No specific safety data could be identified.

Physician’s advice before use is recommended.

Vitamin B6 has been reported to have an adverse interaction with Vitamin K in presence of folic acid with an increase in INR (International normalized ratio).

Some anti-depressants when used vitamin B complex can cause panic which could be a potential effect of these vitamins on central nervous system.

When used with oral contraceptives B6 may reduce their effectiveness and cause nausea.

As a co-therapy like in case of combined collagen crosslinking (CXL) and intrastromal corneal ring segment (ICRS) implantation to treat keratoconic eyes,

no adverse effect from the riboflavin injections were reported.

Anaphylactic shock due to intravenous administration of vitamin B complex has been reported earlier.

Thiamine hydrochloride (vitamin B1) in the formulation is known to cause life threatening anaphylaxis especially on multiple administrations if patient is allergic to it.

Side effects from vitamin B2 in the preparation are rare but skin test or when necessary the more sensitive intradermal skin test may be advised to diagnose anaphylactic sensitivity.

Larger doses of niacin tend to cause nausea and vomiting. In the blood stream as nicotinic acid,

it can cause skin flush and this reaction is actually responsible for the tolerable upper limit (UL) for niacin at 35 mg/d for adults in US.

Vitamins B5 and H have reported to cause life-threatening adverse reaction of eosinophilic pleuropericarditis and patient history for such allergy should be checked before administration.

Prolonged overdose of B6 (150-200 mg/day) over weeks can cause severe sensory-nervous-system dysfunction and ataxia.

With normal usage serious adverse effects are not reported for pyridoxine (vitamin B6), however, diarrhoea, emesis and rosacea-like dermatitis may be observed in some cases.

Keep all medicines out of the reach of children.

Throw away any unused medicine after the beyond use date.

Do not flush unused medications or pour down a sink or drain.